Vikram Gokhale Latest Health Update: Renowned Bollywood actor Vikram Gokhale, who has been hospitalised in Pune, has been undergoing treatment and has shown some improvement. According to the latest update, Vikram will be off the ventilator support in 48 hours. An official statement by Dinanath Mangeshkar Hospital has been shared where the official said to media, “Actor Vikram Gokhale’s health is improving, is showing slow but steady improvement. He is opening his eyes, moving his limbs & likely to be off ventilator support in next 48 hours. His BP and heart are stable”. 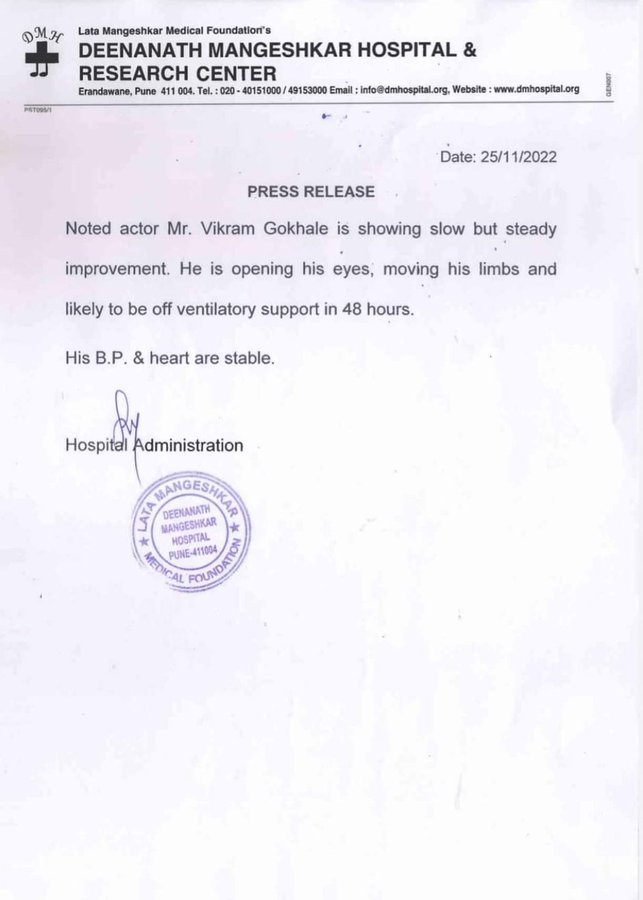 On Thursday, Vikram’s death rumour circulated all across social media following which several Bollywood celebrities took to Twitter to express condolences. However, his family refuted the news saying that he is on life support and in critical condition.

Vikram made his film debut at the age of 26 in 1971 in Amitabh Bachchan-starrer Parwana. Over a career spanning more than 40 years, Gokhale has appeared in various Marathi and Bollywood films, including Agneepath, starring Amitabh Bachchan in 1990, and Hum Dil De Chuke Sanam, with Salman Khan and Aishwarya Rai Bachchan in 1999.