Adipurush Poster Copied: Prabhas starrer Adipurush has been facing much criticism since its teaser came out. The film is based on the Hindu text Ramayana and features Prabhas in the role of Lord Rama. After the teaser of the Om Raut directorial was released online, several fans took to social media to express their disappointment, calling out the makers for the lazy VFX and CGI work in the film. Now, an animation studio has claimed that even the film’s poster is copied from their original work.

Taking to Instagram, an animation studio posted a copy of the poster that they designed in the past featuring Lord Shiva. The poster showed Shiva flying and posing with a bow-arrow in the same way Prabhas does it on the poster of Adipurush as Lord Rama. The studio though mentioned that they don’t wish to file any legal copyright claim since such brazen ‘inspiration’ from artistic work by a big production banner is ‘funny’.

“It’s disappointing to see our work being copied like this. But over the years, it’s happened so many times that it’s just funny at this point. We don’t see the point of fighting this as we’d rather focus on bringing you guys awesome content and continue building that road. But maybe just maybe, the word will spread 🙂 (sic),” read the post. 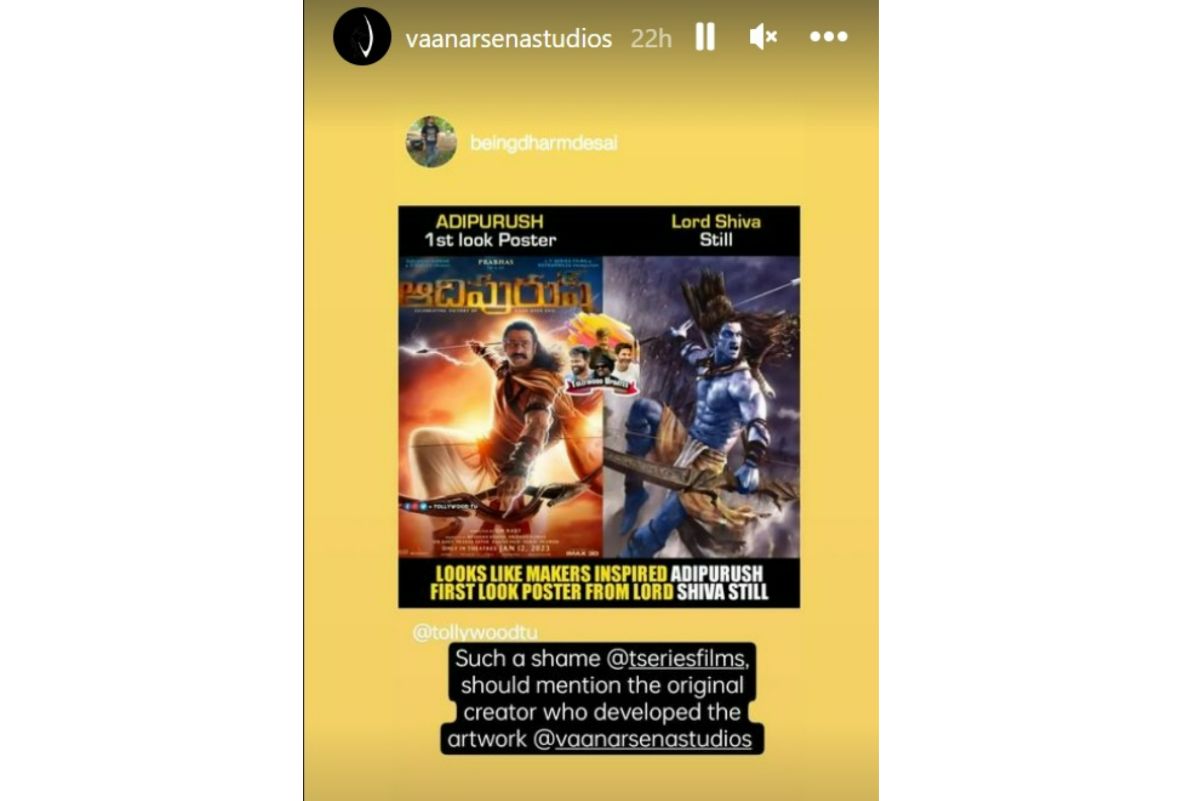 Adipurush features Kriti Sanon as Sita and Sunny Singh as Laxman, other characters from Ramayan. The teaser of the film was launched in Ayodhya last week. On Dussehra, Prabhas was seen at Delhi’s Luv Kush Ramlila, performing the Ravan Dahan ritual with the rest of the committee.

Meanwhile, Adipurush director Om Raut recently commented on receiving flak for the bad VFX work in the film after the teaser release. Speaking to Indian Express, he defended his film and the VFX quality. Raut said the film is meant for the big screen and the VFX work is so grand that it can’t be contained in a cell phone screen. “I was disheartened for sure, not surprised because the film is made for a larger medium-the big screen. You can cut it down to some extent but can’t bring it down to a mobile phone. That’s an environment I can’t control. Given a choice, I’d never put it on YouTube but that’s the need of the hour. We need to put it there so that it reaches a wide audience,” he said.

Adipurush is one of the most-anticipated movies releasing next year. The film is slated to hit the screens on January 12, 2023. Watch this space for all the latest updates on the film!